[Transportation] Road Tax disc: 3 things that you may not know about this piece of paper 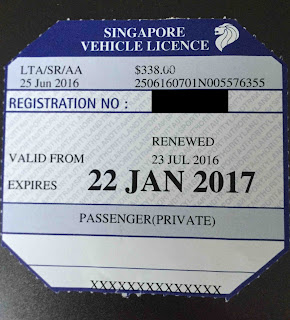 In today's news report, the Land Transport Authorities (LTA) has rung the death kneel on Road Tax Disc. Come February 15 next year, motorists will not be required to display road tax discs on the windscreen of their vehicles. (1) For years, this is one piece of paper that had accompanied all road worthy vehicles in Singapore. Failure to display a proper road disc, or putting up an expired one, had seen fines being meted out to these motorists.

Soon, motorists can keep their windscreen clear of clutter. If not, at least one lesser piece of paper to be pasted on the windscreen. But what are the interesting facts about this small but important piece of paper?

1. Where are road tax discs positioned on the windscreen?

It is by law that road tax dics are positioned on the left of the windscreens.

In a forum reply dated January 11, 1969, the secretary of the Automobile Association of Singapore brought up the Road Traffic Ordinance - Motor Vehicles (Registration and Licensing) Rules Part II, No.28 where it reads "The licence shall be carried...on the left side of the vehicle facing towards the near side of the road." (2)

The rule was updated in 1972 to ensure that the wording as to how to place the disc clearer.

"The road tax should be placed at the left lower corner of the windscreen facing forward so as to be clearly visible from the front at all time whether the vehicle is moving of stationary". (3)


2. Were there instances where motorists were fined for not displaying the road tax disc?

Indeed. In 1971, a Mr Tan was fined S$20 for not displaying his Registry of Vehicle (ROV) tax disc (4)  while in 1970, a Mr Quek was fined S$30 for driving with an expired road tax disc. (5) Both of the men were caught in 1968. It seemed that after more than two years, the courts had wanted to get hard on these motorists and to show the importance of displaying the road tax disc in a proper manner.


3. Did the rule of displaying the road tax disc on the left of the windscreen worked for everyone?

Well no. In 1969, a motorist questioned this decision as at that time, there were left-hand drive cars. The motorist said that it would obstruct the view of drivers if the road tax disc was displayed on the left. (6)

Posted by REDLeader at 5:20 PM No comments: