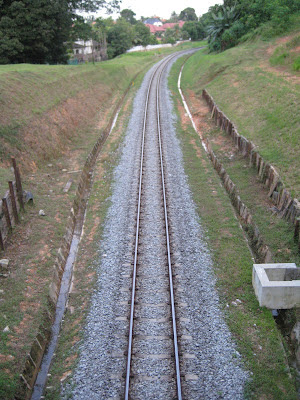 In 1902, the railroads in Singapore used to link Bukit Timah and Woodlands to the city. Then in 1923, a railway line linked Singapore directly to Johore via the Woodlands causeway.
That was more than 100 years ago and I had the opportunity to visit the Bukit Timah Railway Station twice. Getting to the station, one must hit the dirt track. You can vaguely see the train station from the main road.
Nostalgia engulfed me once I stepped into the train station. Location signages read in malay rather than english - Singapura. Gambier plantation owners and their workers would have stood at this train station, waiting for the train to bring them into town.

The railway station still looks authentic and have weathered the change of the century well. Walking along the railway line also brought me to a small bridge that should be decades old.
Posted by REDLeader at 11:32 PM No comments:

Should I Stay or Should I Go?

Singaporeans are sometimes known to be a population of complainers. With the latest survey results by Mercer, I hope that they will stop complaining. But if you're always looking at glass as half empty all the time, it will continue to stay that way. But here're the results.

Singapore emerged tops in Asia for quality of living and is ranked 32nd in the world, according to Mercer's annual quality of living rankings. For a small country without any natural resources, it's a privileged to be listed as best in quality of living - the government has ensured that they have provided Singaporeans with affordable housing, while also making sure that the homes are of quality.

If you're concerned that you'd be mugged in those big cities, it'll definitely not be so in Singapore as the country tops Asia for personal safety. Of course, general safety has still to be observed. Guns are outlawed and anyone found in possession of a gun will face the gallow.

As the scientific term goes, with every action there's equal and opposite reaction. The cost of living for expatriates rose from 17th to the 14th most expensive city in the world.
Posted by REDLeader at 9:35 AM No comments:

Dining With The Jews Singapore is a cosmopolitan city with a wide array of food for various community. I've lived in this melting pot of cultures all of my life.

The more common food that you can find in nearly all food courts are Chinese chicken rice and fried kuey teow, the Malay nasi lemak and mee rebus, the Indian roti prata and murtabak. You might also find Japanese bento set and asian-ised version of the speghetti.

But what I've not tried all my life until recently was kosher food. So what is kosher? Well, it's food prepared in a traditional Jewish way according to the biblical old testament. Meat such as pork and pigeon will never find their way on the dining table. Also, seafood that do not have scales and fins are not to be consumed.

So when I made my way to Awalfi, Singapore's only Kosher restaurant, I was filled with excitement over the thought of having a kosher meal.

Located at 24 Waterloo Street,within the Jacob Ballas Centre, this restaurant is totally out of view of the general public. First, you have to go through a secure-looking gate. Then you have to take a lift up to the seventh storey before you arriveat this small but amply decorated restaurant. They seem to keep everything under a veil as they don't even publicise about their restaurant online.

Well, the food that they serve is a spread of asian, greek, middle eastern and even western.

I ordered fried fish with rice and thought that it would be served differently, but lo and behold, the fish looked like what any fried fish and chips would look like. Now I understand that it's the way they cook their food, and not that it'll taste anything different. Also, don't expect the waiters to be Jews. The one that waited upon us was a Sikh, while those in the kitchen looked either middle eastern or indians.

As for the food, it does not cost you a bomb to have a taste of a kosher meal (About S$16-$30 depending on what you are having). But for me, it's priceless to have a meal among the practising Jews and Rabbis.

Changi Prison Museum: Lest We Forget It was a phrase used by the Australian and New Zealand (ANZAC) as a remembrance to the soldiers who were felled during the war, and there were truly many brave fighters who took on the Japanese during World War II.

The British, Australians, New Zealanders, Chinese, Indians, Malays and Eurasians all fought side by side but was no match to the Imperial Japanese troops. Singapore fell on 14 February 1942.

The pain has not totally healed for these defeated soldiers, but many still come to this Museum to seek solace. It was a useless war that brought pain and suffering to all parties involved in this episode of life. Many lives were lost in this prison, and from here, many were sent to meet their deaths while building the Death Railway in Burma.

Though located in Changi - East of Singapore - it is still a museum worth visiting if you want to understand the hardship of what the 1942 populace had gone through during the Japanese Occupation.

My paternal grandad, being educated in English, was executed as he was a civil servant and was deemed to be in collaboration with the British. While my maternal grandad escaped the Japanese tyranny by hiding in a drain and only returning home after three days. He then made peak caps for the Japanese just to get that little bit of food supply to keep the family from starving.

More than 60 years have past and all of my grandparents have passed on, and this little museum holds the history to that era of suffering. Lest We Forget.

For direction, please visit http://www.changimuseum.com/contact.htm
Posted by REDLeader at 11:13 PM No comments: