This was a popular market and hawker centre in the 50s and 60s. The Lim Tua Tow market was sited on the left of the picture, while the shop houses along Teck Chye Terrace are on the right.

The place surrounding the market was rather filthy and complaints were made to the government in hope that something could be done. There was no proper refuse disposal and items that were unwanted were dumped into the side drains. (17) 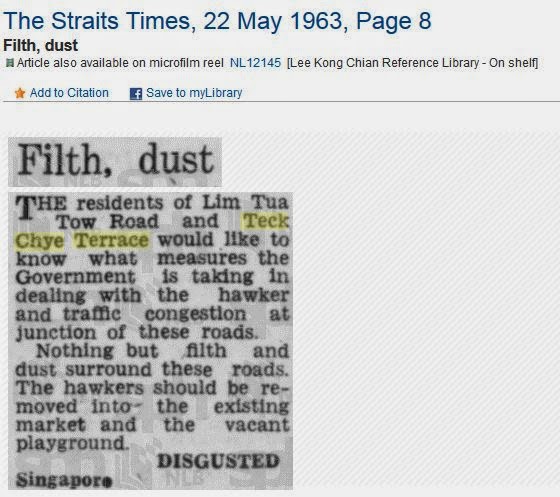 Not only was the place laden with filth, gangs also ply the back lanes. (5)

The market was demolished in the 1980s due to road expansion. The shop houses on he right are still currently there.

Ask anyone about what Teck Chye Terrace is about and they will tell you it's all about food. From the traditional porridge stalls to buffet styled steamboats, this stretch of shophouses have different eating places to whet your appetites. (26) More recently, this row of shophouses made news as "five adjoining two-storey shophouses" were sold at a whopping cost of S$14.63m. (12)

But what was this place like before the advent of these makan places?

After the Japanese occupation, the Christian community from Paya Lebar Methodist Church pumped in money to build a children's playground close to Teck Chye Terrace, adding some joy to these younglings. The area where the playground was to be built was said to be "overgrown with weeds, banana plants, and bushes and is a dumping ground for scrap and timber". (15)

Adding to gang activities, the filthiness of the place and mosquitoes infestations, Teck Chye Terrace was not a place where families would want to make this place their home. (18)


In 1962, one of its residents named Teck Chye Terrace as "one of the filthiest roads in Singapore". The road was totally crowded with "more than 100 stalls illegally constructed obstruct road users". (8) There was even a call to move these stall holders into the existing market and vacant playground. (3)

Companies that used the buildings at Teck Chye Road include:-

d. the now defunct Serangoon Sewing Machine Co. at 33, Teck Chye Terrace (10) in 1982-89. The company went on to sell other electrical appliances such as coloured television, video recorder and hi-fi sets. (24) (25)

Posted by REDLeader at 2:32 PM No comments:

A Ride Through the Years

Today in Singapore Trails, I visited the bus exhibition at Pek Kio Community Club. I read about this exhibition and I thought back to those years where my parents brought me and my sisters around via public transport.

Frankly, public buses has been a part many people's lives. I remember the bus brand - Leyland. I remember the thin-rod gear stick that sometimes, the bus drivers found it hard to engage. I remember the bus conductors using their ticket clippers to knock on their ticket holders to get the attention of those who have yet to pay their fare to pay up. I remember the fogged-up bus windows whenever it rained and where we were forced to shut all windows, barring those that were stuck. I remember my first bus ride, bus number 62 that brought me to my school in Geylang. That was also a time that I bawled my eye out as I could not reach the bell because I was way too short to press the red bell strip found on the ceiling of these buses.

There were pictures of trolley buses used during the Japanese Occupation. During that time, electricity would have been at a premium and thus a ride in these trolley buses would not be within reach of the common man.  It was also shared that charcoal buses (Burning of charcoal to power the buses) were also used.

Bus Tickets
The bus tickets were all so colourful. Different colours signifying the different prices that one paid based on the planned distance travelled. There are the single coloured bus ticket for students, while the adults have the tiered-pricing tickets based on distance. I used to collect heaps of these.

Posted by REDLeader at 2:51 AM No comments:

Phoenix Park: The Walls Have Ears


This was a Heritage Festival Tour that was top on my to-do list. This is one place that we cannot just walk in to visit. It has been this way ever since the ground was occupied by Singapore Japanese Golf Club from 1930. (1)

The Japanese team was a keen player of the game. They had competed against other foreign-based teams since 1930 and their final competitive game was against Johor in 1941, just before the war. (2) Other teams the Japanese team had played against were the British, Americans and also British Municipals. (2)


When Japanese took over Singapore in 1942, the Japanese ordered the Allied Forces to surrender their weapons at the Golf Club. (3)

The complex was erected in 1949 and was designed by the architectural firm Messrs Palmer and Turner. It was called “Phoenix Park” as the British’s Southeast Asia Command  was located there and their emblem was of a mythical bird.(4)

Phoenix Park had also housed the who's who of the post-war British government. The offices of the Commission General, the Commander-in-Chief Far East and the Far East Defence Secretariat were all based there. (4) (5)

There were also other critical services that based themselves at Phoenix Park. such as the Regional Fisheries Representative of the Food and Agriculture Organisation. The organisation later moved themselves to Bangkok. (6)

The British left Singapore in 1971. The Internal Security Department (ISD) made 318 Phoenix Park their home in 1976 and shortly after in 1977, the Ministry of Home Affairs (MHA) also set up their headquarters there. Both ISD and MHA moved out of Phoenix Park by 2002. (7) (8)


The doors of 318 Phoenix Park was opened to public for the first time. Both the staff and students from Avondale Grammar School, who school was located within this historic building, were wonderful hosts. The students, some of them as young as six-years old, brought to life historical milestones through their re-enactment. One was about the critical rice talks that was held in that building. The purpose was to ease the post World War 2 rice shortages in that region. (8)


Another re-enactment by the students was the Southeast Asia Treaty Organisation (SEATO) talks that was held in the 1950's. Countries came together to find ways of how to stop the communist threat in that region.(8)

All in, it was a really lovely visit to this historical building.

The buildings went through a major makeover and are now joined together by two bridge connectors and an overhead shelter. The National Gallery Singapore are into its final stages of completion, that is to transform the place into the largest gallery of South East Asian's art. (1)

We were given an exclusive tour of this unique museum called the Naked Museum. Our wonderful museum docent, Sheila, was herself a former lawyer from the Arbitration Courts. I enjoyed her candid quips and also her in-depth knowledge of the place as she had worked in the Supreme Courts of a number of years.


Singapore's City Hall - Built between 1926 and 1929, the building was formerly known as the Municipal Building. (2) This building holds two monumental blocks of history. This was where the Japanese officially signed the surrender papers, effectively returning the rule of Singapore back to the British in 1945.


The Japanese hung their heads low, walked up the 23-steps of the City Hall and into this magnificant hall. The massive pillars and wooden pane doors looked pretty much untouched by time. In this same hall in 1959, the first fully independent Singapore government held their first swearing-in ceremony. (3)


Built on the site of another former great - Hotel L'Europe, the Supreme Court was the place where lawyers battled it out; where judges say "guilty" or "not guilty". The former Supreme Court, built between 1930 and 1939, had many more verbal narrative than the City Hall as the latter saw criminals, commoners and legal professionals walking through its doors, each of them with a story to tell. (2)


Sheila then brought us out to the balcony to have a look on the outside. The weather was pretty good and we had a good view of the Padang, though much of the grass field has been laid over in preparation of Singapore's 50th National Day.


Many things of old within the two buildings have been nicely refurbished. For example, the rattan chair
held up many people of the past. They must have waited patiently for their cases, or the cases of their loved ones to be read.

Sheila had more to share about the Supreme Court. This library holds bitter-sweet memories for her. This was where she was sent to by senior lawyers requiring quick information. There were just row after row of leather-bound books and she had to look through thick stacks of law books to locate the information.


It was a truly an eye-opener of an outing and meeting dedicated docents such as Sheila truly bring to life the rich history of the place.

2. National Gallery Singapore. About the Buildings. http://www.nationalgallery.sg/buildings/ Accessed on May 2, 2015.

3. National Gallery Singapore. City Hall and Former Supreme Court at a glance. http://nationalartgallery.sg/wp-content/uploads/6_OpenHouse_Guided_Tour_Brochure_101110.pdf Accessed on May 2, 2015.
Posted by REDLeader at 10:25 PM No comments: