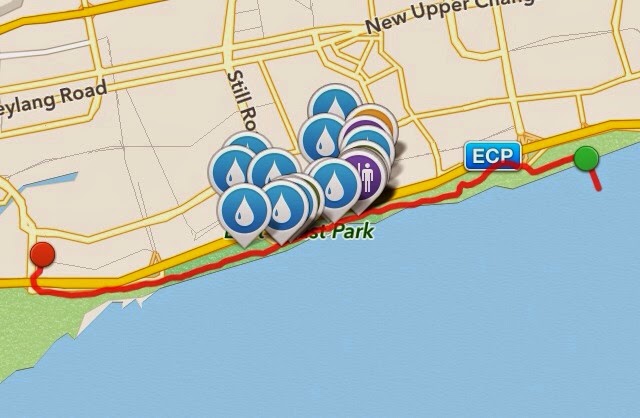 East Coast Park - A place where families spend their time relaxing at the beach; where lovebirds walked hand-in-hand enjoying the nice evening breeze; where cyclists and joggers come to take in the fresh morning air. The trail that I took started off at the Bedok Jetty. 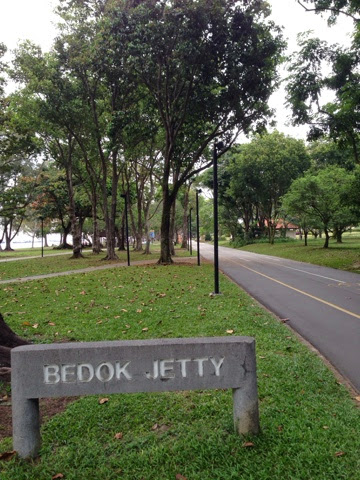 Bedok Jetty was "used exclusively by the Ministry of Defence (MINDEF)" prior to it being open to the public. Though it is now used by anglers and cyclists, its "status as a MINDEF base remained unchanged".

During the height of the Vietnam war in 1975, the area around Bedok Jetty was converted to a temporary medical centre for refugees. (3) The vessels that brought these Vietnamese refugees to Singapore were anchored off Bedok and the refugees were required to stay on board their vessels. (4)

Singapore Commandos were deployed to ensure food were properly rationed amongst the refugees during their interim stay in Singapore's waters. This was a temporary arrangement as once the refugees were attended to medically, and their boats were repaired, these refugees would then make their way to other countries and American-run islands that had agreed to accept them. Guam was one such island. (5)

Other than refugees, East Coast was also a conduit for badly damaged American trucks, jeeps and other vehicles. My history teacher, Mr John shared this on my Facebook:-

Most of the damaged vehicles were heavy trucks, jeeps and similar vehicles, Didn't see heavy armor,probably because of their sensitive nature.

Even till today, MINDEF is still using the jetty for their military exercises. Still, they co-existed with anglers who have found that they jetty was indeed a nice spot to do their fishing. (7) (8) (9) (10) During my military days, I remembered that I landed on Bedok beach close to the jetty via a landing craft. It was my one and only time and I remembered that it was not an exercise. Beyond that, the reasons why I was there has become rather hazy through the passing of time. 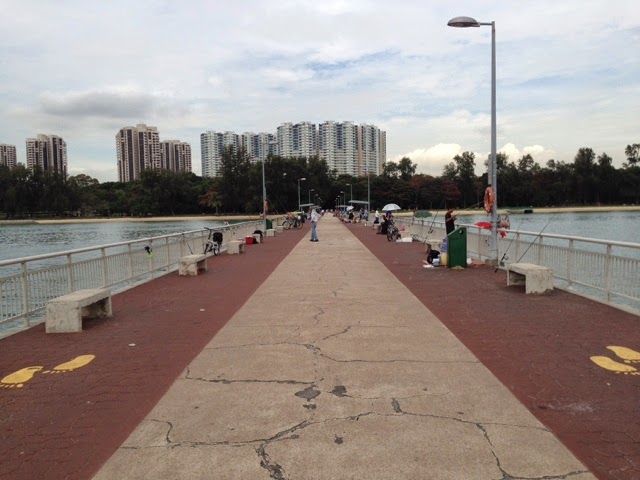 Beyond its military purpose, the Bedok Jetty has been honoured as one of Singapore's favourite icons. (11) Generations have thronged this jetty. It was a place that I grew up visiting; fishing with friends though I am hardly a fan of fishing. 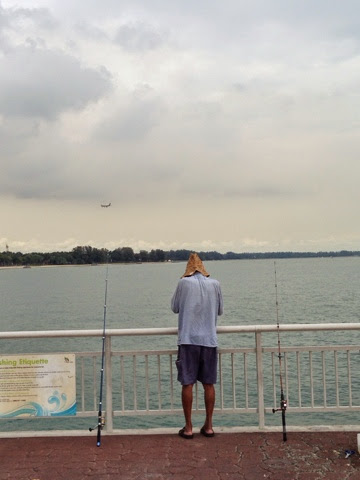 With it being the longest jetty in Singapore, the Bedok Jetty sees many curious on-lookers who will stroll down the jetty while looking at the catch of the different anglers. It's amazing to see the wide array of fishes caught by these anglers. 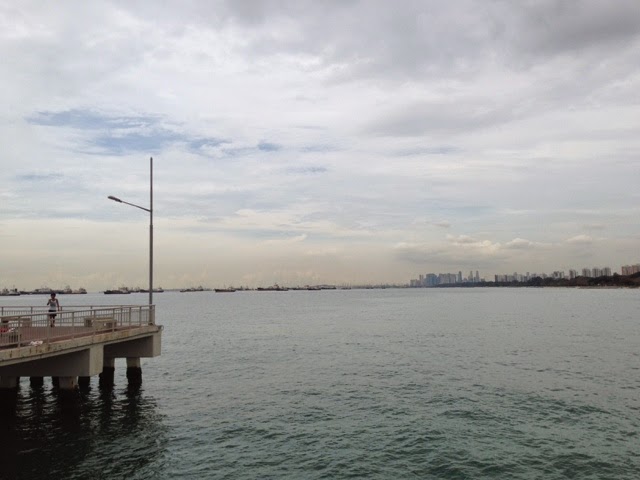 In the end, it's really the ambience of the place, the serenity, and the view from the jetty that  makes Bedok Jetty that tad bit special.

To visit the Bedok Jetty, you will need to head towards East Coast Car Park F1. 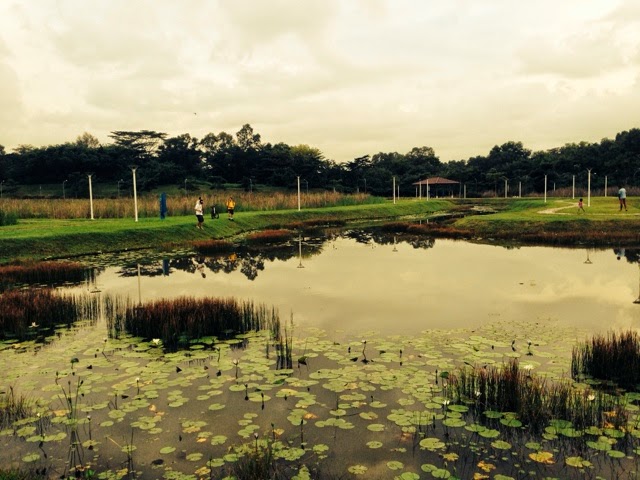 Lorong Halus - a far flung corner of Singapore that no one had wanted to visit. The road off the Tampines Expressway was not only a landfill, it was also a place to dispose the unsavoury collection of the nation's night soil. (1) (The "century old night soil bucket system" and its night soil disposal station closed down in 1987) (2)

The "rudimentary  system (was) a poor reflection of poor public health standards (and that) would keep foreign investors away", according to Mr Tan Gee Paw, Chairman of the national water agency, PUB. (5)

There were more gloom linking to this place. Gangsters lurked in various corners and when the government had wanted to re-develop Tanjong Rhu, they moved "more than 40 charcoal dealers" to Lorong Halus.  (3)

I remember two instances whereby I had a close encounter with the landfill - both times were in 2002, three years after the landfill was officially closed.

The first was my unexpected visit of the place. I'd taken a wrong turn along the expressway and I'd ended up in Lorong Halus. It started of with it being a metal road. But that soon gave way and before I knew it, I was driving on a muddy road with huge tipper trucks coming from all directions! There was also some burning of refuse happening in that area. My mind went "oh-oh". I quickly did an about turn and scooted out of that area.

The second encounter was when I was house-hunting in Punggol. The wife and I were at Punggol Field Road and from where we were, we caught a whiff of the odour which we believe was coming from Lorong Halus. That encounter helped made up our minds. We chose a housing estate two MRT stations down. 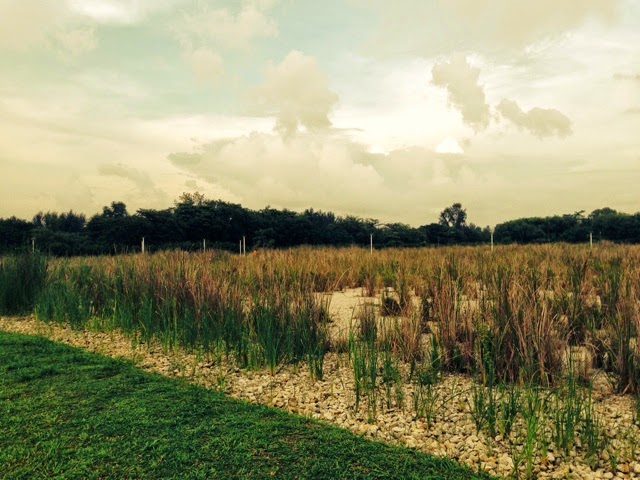 Today, the entire Lorong Halus has been transformed into a wetland. Sited next to Serangoon Reservior, the Lorong Halus Wetland was officially opened on March 5, 2011 by Deputy Prime Minister Teo Chee Hean. (5)


How to get there

If you're driving, you can enter via the Tampines Expressway (Exit 7) towards Changi Airport. The exit will lead you towards Lorong Halus.

If you're jogging or cycling, there is also a bridge from Punggol that runs across the Punggol Serangoon River towards the wetlands.

[Hospital] Woodbridge Hospital - Are You Mad? 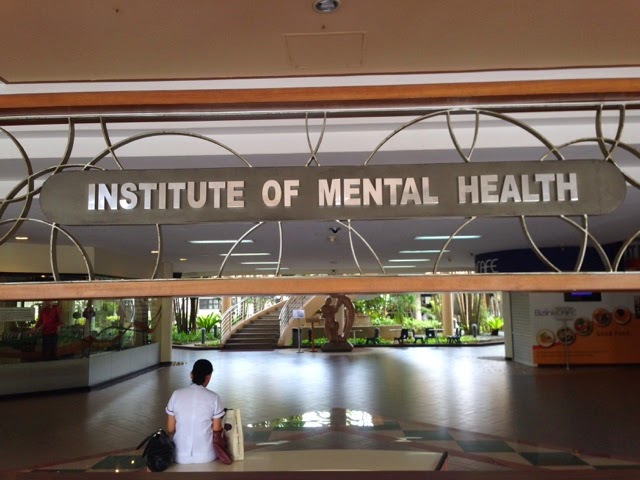 Institute of Mental Health (IMH) - formerly known as the Mental Hospital, was established in 1928. It was later renamed as Woodbridge Hospital in 1951. Today, nobody wants to be associated to the names. Even the road leading to the hospital, Jalan Woodbridge, is now known as Gerald Drive.

So why would anyone want to visit this place? Well, the hospital is no longer the dreary place that it was once known to be.

In 1993, the hospital moved from the old Jalan Woodbridge to Buangkok. There's a quaint food court that faces the Heritage Garden. There's also the Woodbridge Museum that is open to public. 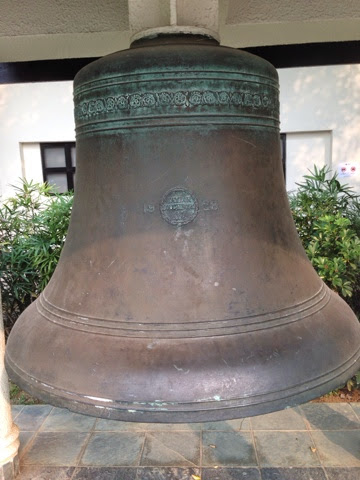 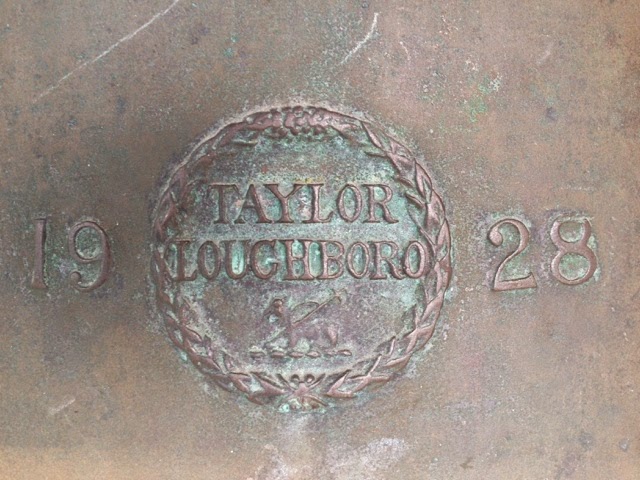 Greeting you at the entrance is this antiquated bell. Built in England, this 1928 bell was installed in the old clock tower that has since been demolished. The bell rung thrice a day, reminding the patients that it was meal time. It was also rung on special occasions such as Christmas and New Year. 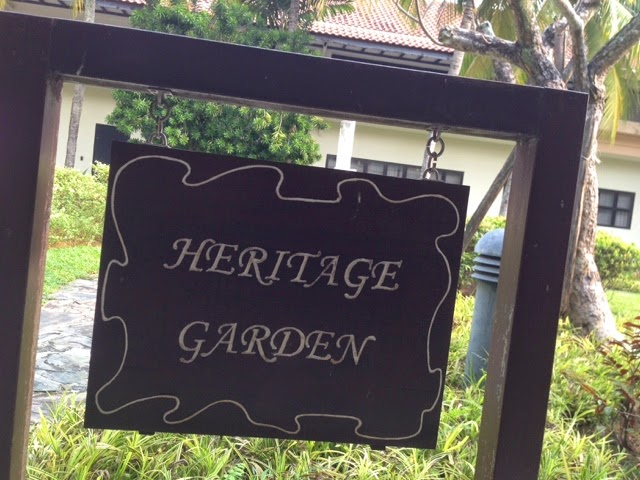 I was actually stopped by the security guards as photography of the wards is not allowed. However, I assured the guard that my intent was pandering towards history and heritage. With that, you want along his way as I continued my visit to the hospital. Walking through the lobby, you will come to the "Heritage Garden".

As from the newspaper cutting above, one can see the distinctive star burst concrete ventilation that allowed for fresh air to enter the ward. IMH has salvaged one of these ventilation.

Found in the Heritage Garden are other parts of the old building that sought to keep the mentally ill patients in - the metal gates and the solid metal tubes windows. 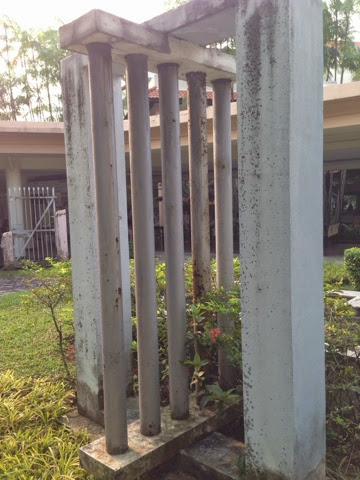 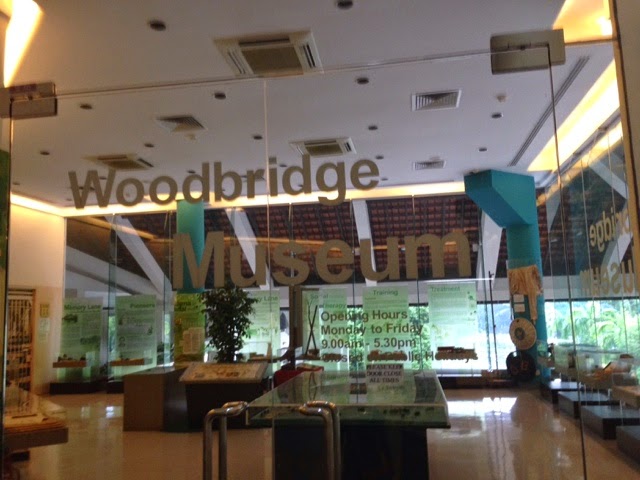 To further capture how the Woodbridge Hospital operated in the past, IMH dedicated a portion of space to set up a museum. This is on the second level of the main building. 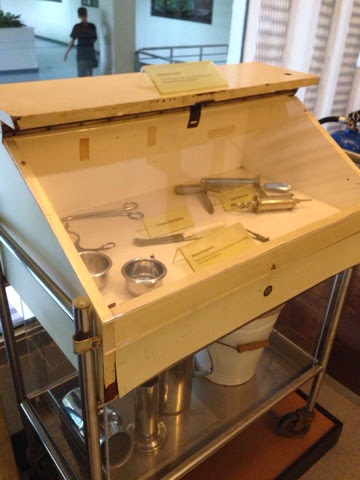 Seeing some of these rudimentary tools on display, I can just imagine the horrid times that these patients had to go through. 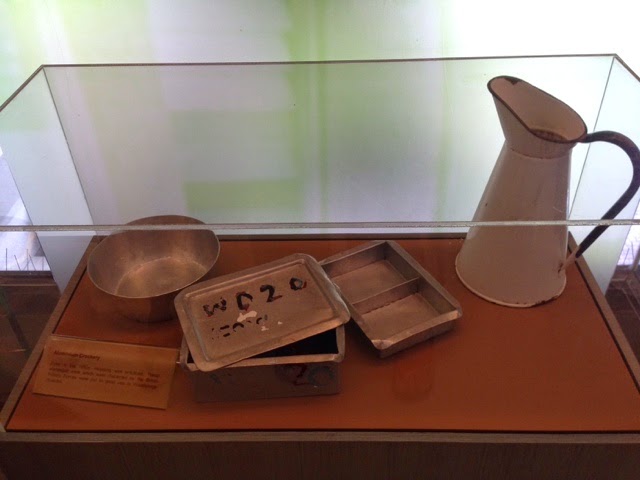 The non-descript food container and the water jug added no joy to the Woodbridge patients. Everything was sterile; no colours on the wall to add life. 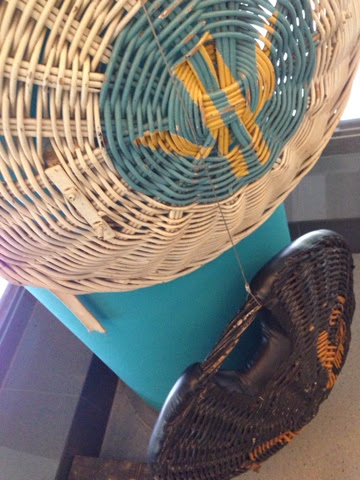 When things get violent and unruly, the staff will whip out their batons and wicket shield to defend the institution.

Visiting the Heritage Garden and the Woodbridge Museum has shown me how much the treatment of mental patients has changed. The current lodging condition of IMH is surely much better than before. Medical advances have also taught medical workers how they can treat mental patients with greater dignity. 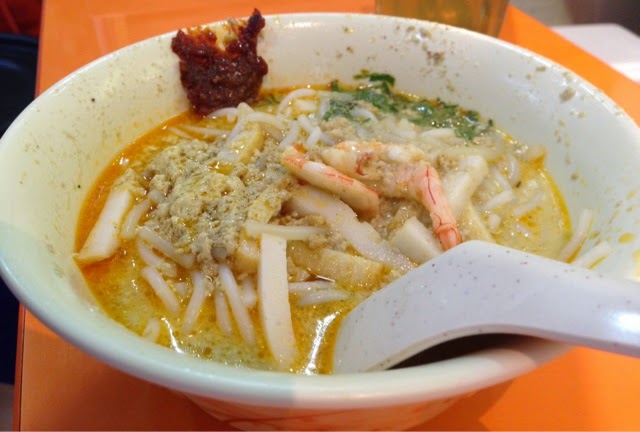 Janggut Laksa - What a name to call your laksa stall. When you say that someone has a janggut, it means that he must have kept a beard of good length. I'd thus imagine that the original stall owner, the late Mr Ng Juat Swee, must be a keeper of a beard. But seemingly, it was far from the truth.

The name "Janggut" came about because Mr Ng, who was known as the original laksa man from Katong, "had a few strands of hair coming out from a mole on his left chin". (1)

Mole hair = Janggut? The sense of humour that the people of the 1950s had. Let's move on. Mr Ng started selling laksa in the 1950s and he had carted his noodles and laksa gravy using a tricycle. (1)

By 1963, Mr Ng started selling his brand of laksa at the Sunday market and finally, rented a stall space at No. 49, East Coast Road. (3)  Ironically, it's fiercest competitor 328 Katong Laksa has taken over their spiritual home.

The main stall is now located at Queenway Shopping Centre and really, one does not associate the shopping centre with food. Locals and tourists alike visit this shopping centre to buy discounted sports shoes and gears. Moreover, Janggut Laksa is now a kiosk with nondescript long orange tables and plastic chairs. They have a branch that is located at Roxy Square in Marine Parade.

Singapore's famous food blogger of the ieat.ishoot.ipost, Dr Leslie Tay has given this laksa a rating of 4.5 over 5. (4)

Not only does it tastes nice, the laksa noodles are easily slurp-able as it has been cur to shorter stands and thus, only spoons are used. I'd say that I agree with the rating though in truth, I'm not a food blogger. So I'll keep to the historic of this traditional laksa dish and let the food gurus share about how lemak (rich) is the laksa gravy.