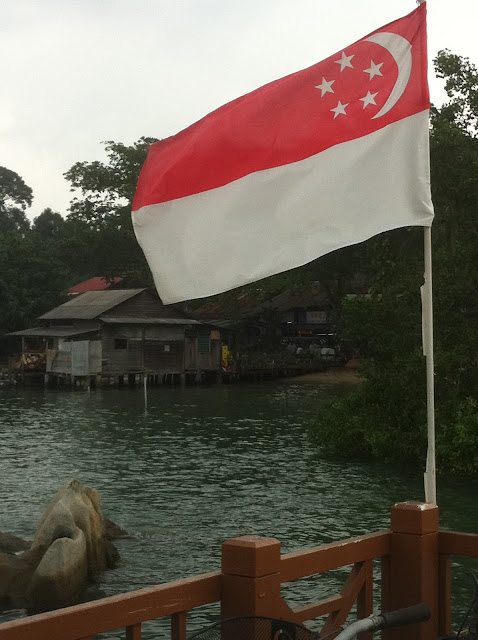 Pulau Ubin - An island that is a stone-throw away from Singapore's mainland but it is so different in every way. Stepping onto the island seems to zap you into history. Nature, houses on stilts, tall coconut trees. All of which are not commonly seen on the island of Singapore.

I'd wanted to bring my family to Pulau Ubin over the weekend but the rain scuppered our plans. Also, I'd wanted to see how we can spend the least amount of money while gaining maximum enjoyment.

We started off from the Changi Point Ferry Terminal. In the past, we just waited at the pier the boatman would just call out to you to board his bumboat. Unlike now, there was no police checks or scanners. We just climb across adjoining bumboats to get to the one that was departing for Pulau Ubin. 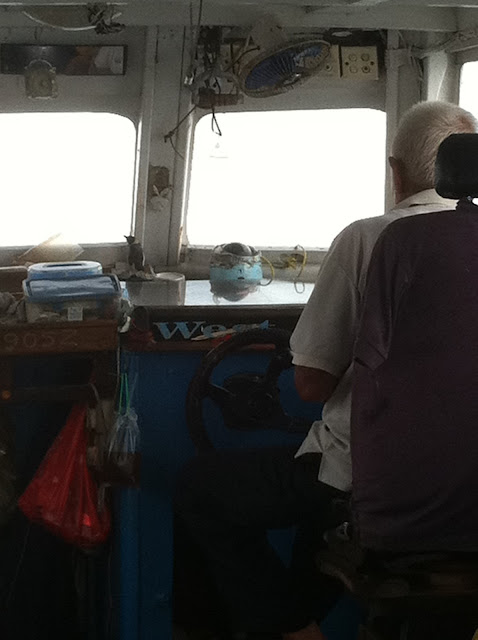 The cost of the bumboat ride was S$2.50 per pax. It does not matter if my son was just 2 years old, as long as he can crawl, they will charge. Fair dinkum I'd say. The kids enjoyed the bumboat ride to Pulau Ubin. 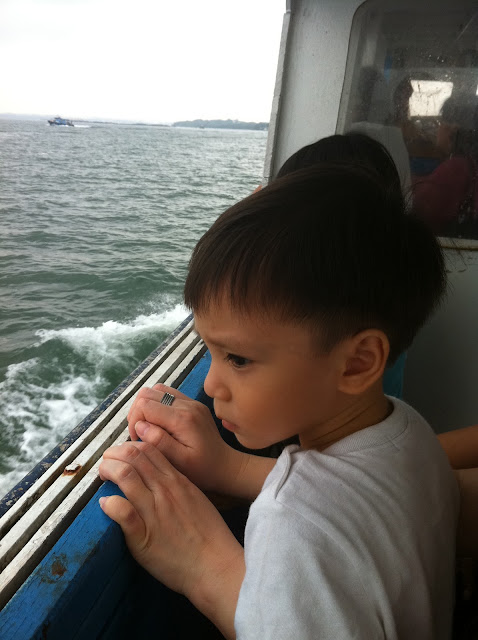 It took us merely 30 minutes to get to Pulau Ubin and off we went for our walk. We took in the sights of the the Sensory Trail where different plants are grown along the trail. We even saw a well. Something that we in Singapore do not get to see anymore. 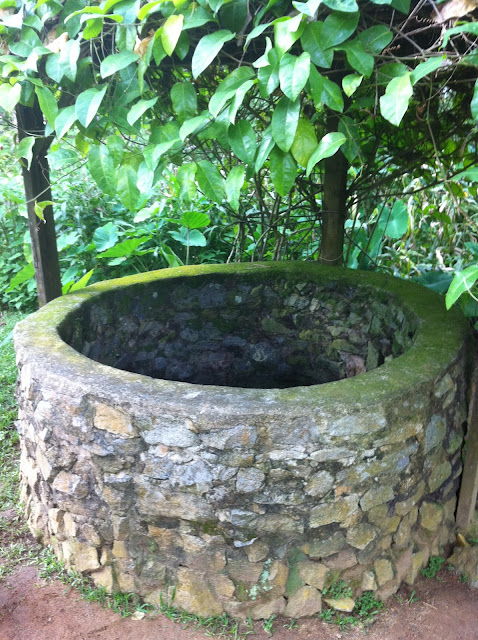 Before we head back to our beloved little red dot, we chose to fill our stomachs with some island food. So off to Pulau Ubin Seafood Restaurant we went. 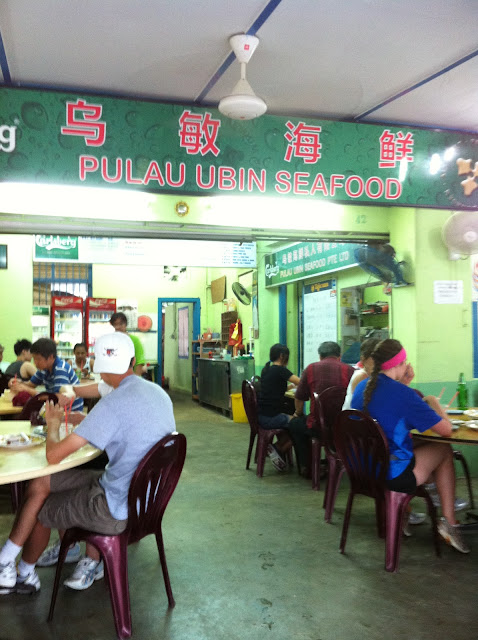 Nothing fancy, we had fried rice, hor fun, a plate of vegetable and kampong chicken. All in all, we spent less than $60 for the entire trip. Good family bonding; Good value!

Landing in Hong Kong!
I'm here in Kong Kong and it's great to be able to continue my walking trail in this bustling metropolis.
This is my sixth trip to this Special Administered Region (SAR) but by far the most interesting one as I had the opportunity to achieve many 'firsts' on this trip and the first amongst which started with my flight into Hong Kong. As our Airbus A380 started it's descent, the aircraft started to rock. The pilot voice crackled over the public announcement informing us that there would be a series of turbulence. The aircraft took a beating and only landed after one failed attempt.

Only when I exited the departure hall that I found out that the aircraft was battered by gale wind from Typhoon Mujigae. I've truly never felt such turbulence and for such a long period of time. Anyway, what's more important is that the skillful Singapore Airlines pilots did well in landing the aircraft.

Previously, the lure of the fast-paced life in Hong Kong saw me staying and travelling in and around Kowloon or Hong Kong Island. But for this 12-day trip, I'd spent most of my time in New Territories close to Fu Tai Estate.

I was most excited to do this trail as this was Hong Kong's very first Heritage Trail that the Antiquities and Monuments Office and the Architectural Services Department had put together in 1993. First stop - Tsui Shing Lau Pagoda. This more than 500 year-old pagoda is the oldest in Hong Kong. (1) It's said that scholars once walked around the Pagoda seven times clockwise so that they could ace their examinations.

Next up, a 200-year old walled village. The walls coupled with a moat that has since been covered, provided residents a good protection from their enemies. (2) The guide was able to show us what was previously holes in the wall. Those were used by the defenders to point their weapons at the enemy. There were other historical buildings such as the old well, Yeung Hau Temple, Tang Ancestral Hall and many more for visitors to explore.

We ended our tour at the Heritage Trail Visitor Centre. The building, perched up on the hill, was once a British police station that was constructed in 1899. The building houses a number of historical and cultural artifacts that showcased what Ping Shan was like in the past.

What was most inviting about the visitor centre after more than an hour walk in rainy and humid weather was the air-conditioning in the building. Well, such weather in Hong Kong is a first for me too as all my other visits were in December and where the temperature stayed a cool 17-23 degrees celsius. Still, this trip was extremely beneficial for me as I saw a side of Hong Kong that I'd previously not seen.

2. Antiquities and Monuments Office and the Architectural Services Department. Accessed on October 25, 2015.  http://www.amo.gov.hk/en/trails_pingshan1.php?tid=2

Posted by REDLeader at 2:29 AM No comments:


Though Mei Ling Street appeared in maps around the late 1960s, the earliest reference to the market I could find was in the 1972 street directory. Today though renovated, the market still holds many hallmarks of a market that was built more than 40 years ago.


Firstly, other than the red emblazoned words at the front of the market, the structure itself looked to have changed little. The windows on the second storey are also those that one would see installed as kitchen windows in HDB blocks of the 1970s.


One design that caught my attention was the brick wall of the stairwell. The walls had circles and semi-circles that not only provided natural lighting for the stairwell, the design also gives this market its character.


The market major retrofitting work that was completed in 2009 (The market even has its own escalators) and both the wet market and food centre on the 2nd level have been well refurbished. Interestingly, live chickens were slaughtered in the market up until 1991 when the Environment Ministry laid down the law of not allowing such slaughter to take place. (2)

I know that there are many choices of food that I can choose from at the food centre, but I was just craving for Fried Kuey Teow that day. So a plate of Fried Kuey Teow I had to get. As I'm no food connoisseur, I'll leave the description of food to the expert. In the nutshell, the Fried Kuey Teow was just alright.

I heard that the chicken rice, lor mee and prawn noodles are worth a go. Any other recommendations?

Posted by REDLeader at 12:38 AM No comments: