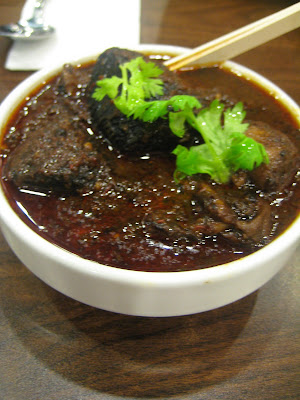 Ok, there's no such word as sedap-ly (aka in malay, totally tasty), but since this restaurant have been raved about on this website, I just somehow had to give it a go. But what better way to put the restaurant to the test than to bring along my dad who's a true blue Peranakan, born and bred with the unadulterated food from the nonya kitchen.

Mr Philip Khoo, the owner of the restaurant warmly welcomed us to his restaurant. Knowing that we're Peranakans, he was quick to quip that the Peranakans are very "cherewet" or fussy about how the food tasted and that food from home is always better than anywhere else. Man with much foresight. To start us on the right track, he threw in the chlli padi and achah.

The food came at break-neck speed, pre-cooked. But that's usually the case for Peranakan food as it requires much preparation.

Ayam buah keluak was delicious and the chicken bits were tender and chewy, but it was the finer things such as the nut was not chunky that caught the attention of the patriach. Philip explained that this was prepared in view of the taste-bud of the general public.

Chap chye was not too bad, though I'd prefer that it would have come with "tau ki" and "black fungus".

Next, Ikan pari masak kuah lada - A dish that Philip said that we should try. The stingray was pretty tender and the kiam chye (Salted vegetable) was a nice addition to its taste.

The other two dishes we ordered were sambal kangkong with its big and fresh prawns, and ngo hiang.

My wife, who's a pure hokkien, enjoyed the food totally. While I, a Peranakan of the 21st century, felt that the food was pretty tasty but lacking in certain areas, while my dad, oh well, Philip will have to return to tradition to satisfy him. Mind you, I've not brought in my mother yet, who's away on a mission trip.

But overall, it was a good experience. I'm glad that Philip has kept the flag of the Peranakans flying. Totally proud of him and I truly wish him well.

Quaint Japanese Restaurant in the Park 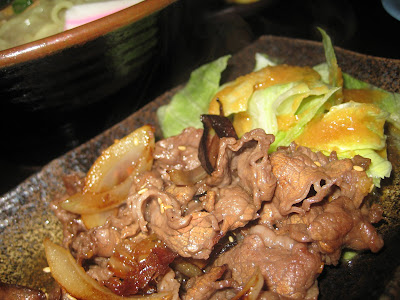 I was at first put off with the sign even though it was shouting out to me, "sushi for 99 cents!". What gimmick is this? I asked my wife.

But lo and behold, we found ourselves in that restaurant still. Why? For the sheer reason of being too lazy to search for another restaurant.


We were shown to our table and even before we warmed our seats, we were told that we had to head to the outside to pick our food. What happened to the tried and tested menu at the table?
Outside, we walked like 100 metres to pick our food. Ok, that's exaggeration! But you make a diner walk for their food, and then, we still have to fork out 10% for service charge? That's totally unpalatable!


So what helped to calm my jittery nerve of expecting the worst? Well, the food did come and I can say that the yakiniku beef ramen was delicious. The sashimi was also pretty fresh, though it could have been sliced a little more thinly. But having it thickly-sliced means it's value for money right? I'm such a cheapo!? But truly, it'll be much easier on the mouth if the slices are thinner.


The sushi, though was pretty attractive with row after row of coloured plates moving around the sushi train. What's more, it's 99 cents! Great draw for a hungry hippo like myself.


A point to note for the management, please don't make us walk for our food, unless your sole intention is to make us hungry again so that we can go for another round.
Posted by REDLeader at 9:51 PM No comments:

Hong Kong In A Mall 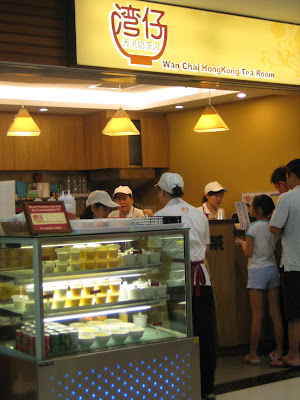 This is definitely hard to miss because it has been strategically located whereby in order to find a short cut to the escalator, you'd have to go past their seating area, cross the disposal bin, before reaching to the other side.


Thankfully, that's not the main reason why you should find yourself at the restaurant!


Well, for one, the food though not great, is still pretty decent. Maybe I'm a sucker for chinese sausages, but yes, I enjoyed their fare. Before I even move off to what else they offer, I must say that their green chilli is nice and crunchy. "That particular huh?", you might ask. But the smallest of details can make or break your enjoyment of certain dish. So yes, one tick for the restaurant.


The menu includes bake rice, wanton noodles and shrimp dumpling noodles. This time, I tried the chicken with sausage and black mushroom. Why? There's a bowl of free soup! Not true!


Anyway, no harm when the cost of the soup has already been absorbed in the price right from the start right?


The down side? no privacy as it's located along the main thorough-fare. The public will have full view of what you have ordered. What's more, they can possibly catch a whiff of the piping hot rice or noodles. Erm, definitely not a place for a hot date, unless you want are aiming to get your date to dump you!


The workers there were more of cleaners than waitress. You write down your own order, and do your own ordering at the counter. To top it all, it's self service. You'd get dumped for sure!
Posted by REDLeader at 11:04 PM No comments: