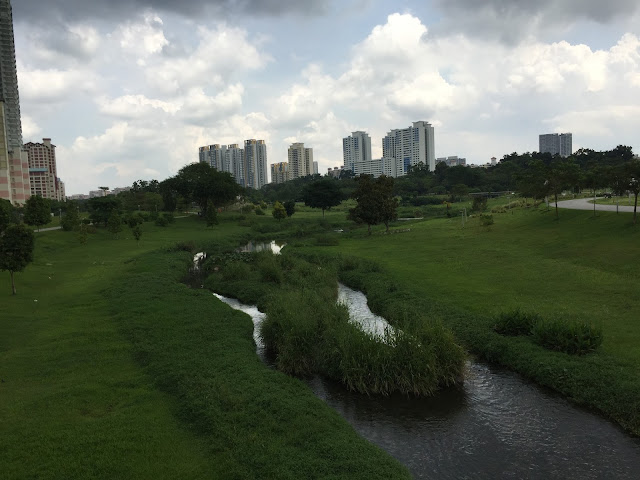 During the 1970s and earlier, a mention of Kallang River or of any rivers in Singapore would have brought a frown to people's faces. Such rivers or "longkangs" are truly filth pits. Foul-smelling water; filth consisting of everyday rubbish to bloated animal carcasses.

So to even think of getting close to the water was out of the question. Prior to 2011, the river was nothing more than just a canal. It was a straight concrete-based canal that was a reflection of what Singapore was like in the 70s and 80s - effective but not exciting. Much of this mimicked what Singapore was like then too. Nothing but concrete structures. 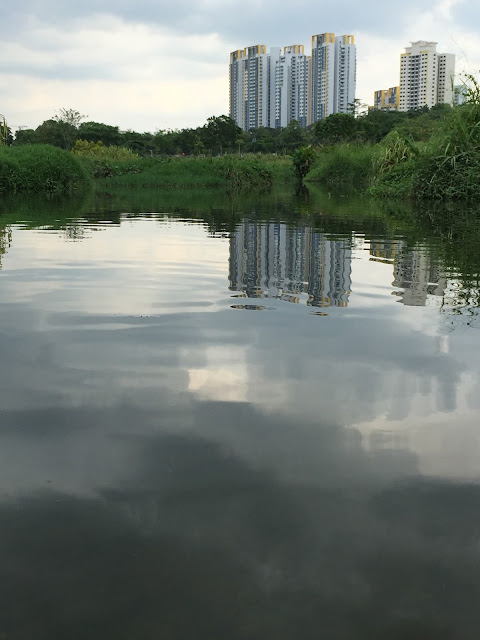 From a silty, dirty canal, this part of Kallang River along Bishan was transformed into peaceful oasis with a meandering river. Completed in 2011 and launched on 17 March 2012 by Singapore's Prime Minister Lee Hsien Loong, the waters are now teeming with fishes and kudos must be given to our water agencies who were able to not only keep the water clean, but to start the entire process of transforming the boring concrete canal into such a lovely site and sight. 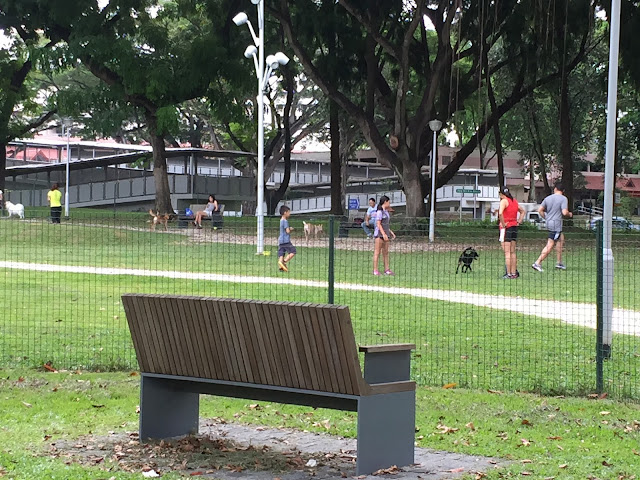 The focus of this park is not only about the transformed canals, but also about the other facilities on offer. The cycling and running track along the parameters of the park; the nice, cosy restaurants and a spa tucked within the lush leafy garden; inline skating rink, and a dog park (There was not even enough money for people to feed themselves, what's more or dog, or even a dog park) for dog owners and their friend to have a bit of exercise.

With this success, the government has announced the next canal beautification project along the Bishan and Braddell Road. This 1.8km stretch of canal will be redone to include elevated viewing decks and a meandering river. The construction will be completed in 2018.
Posted by REDLeader at 6:42 PM No comments:

[Singapore Islands] Pulau Semakau: An Island in the Sun?

The Singapore government recently launched the Phase II development of Pulau Semakau on July 11, 2015. This increases Singapore's capacity to "meet waste disposal needs" for the next 20 years. (1) Refuse was previously dumped at Lorong Halus just off Old Tampines Road till 1999. (2) 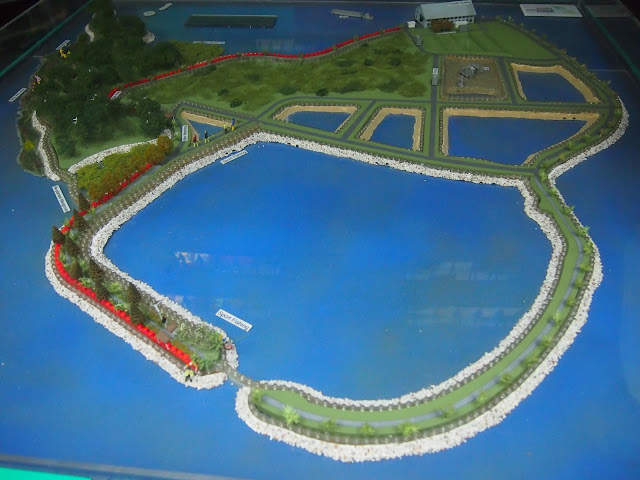 I visited Pulau Semakau in 2013 as part of an organised trip. By then, the island was already a landfill. The guide shared much about the biodiversity in and around the island, but nothing about the island's history. It was a talk by Anthropologists Dr Vivienne Wee, Dr Geoffrey Benjamin, and Ms Normala Manap that opened my eyes to the value of these southern islands.

The island was believed to be rich in history. In 1991, a group of explorers found pottery that were probably more than 200 years old. Dr John Maksic opined that part of a clay jar found could have even been from the 12th century.  (3)

In 1977, more than 600 villagers were ordered to move to mainland Singapore. From thereon, the island laid uninhabited, though not totally. When Dr John Maksic visited Pulau Semakau in 1991, a Malay couple - Mr Rani bin Omar and Mdm Minah bte Gap was seen living on the deserted island. (4)

a. The villagers of Pulau Semakau and Pulau Seking were closely related. They attended each others' weddings
b. They collect fresh water from the larger island of Pulau Bukom

In a more recent article, Mdm Minah shared about how both she and her husband fought off Indonesian interlopers when they were staying on the island alone. Mdm Minah's son shared his pain of losing the island. He thought that the new government led by the late Mr Lee Kuan Yew would continue to allow them to live peacefully on the island. The late Mr Lee had also visited the Pulau Semakau and had promised the islanders modern facilities such as "police post, community clinic and Malay school". Instead by the 1970s, the islanders lost their entire island when they were asked to move. (5)

Interestingly, Former Senior Minister of State Mr Sidek Saniff had previously taught in the Island's school in 1958. (6) There was only one school - the Pulau Semakau Malay School and it was said that the school had been in existence since before World War 2. (26)

Here're some highlights of Pulau Semakau over the years.

1923
Police were alerted to a fight between Malays and the Chinese. The Chinese coolies were working in the lime kiln there (7)

1948
The British government issued identity cards to the islanders (8)

1950
The islanders, consisting of Malay fishermen and Chinese traders, built themselves a school for 30 Malay students. But no teachers were available to teach these students (9)

1951
The Pulau Semakau school was finally opened. The Pulau Semakau Malay school started with five Chinese and 25 Malay students, all learning the Malay language. The Chinese residents of Pasir Panjang contributed $700 to buy timber, attap and cement to build the school while the Malays helped in the building. (11) (12) (16)

With the school up and running, other islanders from Pulau Sudong, Pulau Sebarok and Pulau Senang had asked if the school could also take in their children (10)

1952
The population of the island was at about 350 islands. It was also listed that in 1940, The Singapore Rural Board thought that the island was uninhabited (13) As the island was inhabited, the Board had thus agreed to buy a water boat and build water storage tanks for the islanders. (14)

1957
The government had decided to build Quarters for teachers, Postman and Postal Agency and Sundry shops.

1959
The Ministry planned to build a water tank to arrest the acute water shortage issue during the dry season. (19)

1960
The Yang di-Pertuan Negara Inche Yusoff Ishak visited the island, and planted a coconut tree to commemorate this event. The Penghulu of the island, Inche Abdul Jalil bin Kerip pledged the island's loyalty to Singapore's government. (20) (21)

1969
The Singapore Armed Forces started to use the island for its live firing exercises. (24)

1972
Indonesians were still allowed to move freely amongst Singapore islands. (25)

1975
It was reported that the island was to be developed to house a petrol chemical complex. Swamp, foreshore and seabed would be reclaimed. (27)

1976
More talks about developing the island. Now the reports state that it would be used for shipbuilding and other marine-oriented industries. (28)

Old graves were exhumed and moved to Mount Vernon Crematorium. (29)

1977
Villagers were required to move away from their island. (4)

1978
The island was deemed by the newspaper as a 'relatively undisturbed' island with coconut tree and fishing villages. (30)

1980
By now, the villagers of Pulau Semakau have been moved to the mainland and the island has become a dumping ground of waste materials dredged up from the sea. (31)

1982
A decision was made to join both Pulau Semakau and Pulau Seking. At this point, the newspaper report had still mentioned that it was done to house a international petroleum centre. (32)

1988
First mention of Pulau Semakau being a offshore refuse dump. (33)

At this point, community centres are still bringing their residents to the southern islands (Including Pulau Semakau) for tours. (34)

1989
The newspapers mentioned that the island is now uninhabited "with only one watchman living there". It was also reported by a NUS professor that corals lying around the island have already been damaged since the early 1960s due to reclamation work done on the island. Soil dug up from the building of the Central Expressway, and earth spoils from Pulau Seraya Power Station were also dumped into the sea off Pulau Semakau. (35)

If things did not seemed bad enough with the island being used for waste disposal, the government shared about their plans to build a toxic waste plant on the island itself. (36)

Still on its environment, it was reported that marine life was thriving in and around the water of Pulau Semakau and that the artificial reef that was built using old tyres and cement was a success. (37)

1991
Adventurers claimed that they have found artefacts of more than 200 years old along the beach and also other parts of the island. (3)

1993
Then Environment Minister Mah Bow Tan said that the offshore landfill will see Singapore through to 2045. (38)

1994
Parliament agrees to the reclamation project of the island. (39)

2006
Former Environment and Water Resources Minister Yaacob Ibrahim announced that Pulau Semakau would be ready for anglers and nature lovers to visit. (40)

2015
Pulau Semakau has been further expanded to meet the demands of Singapore's waste disposal. (41) 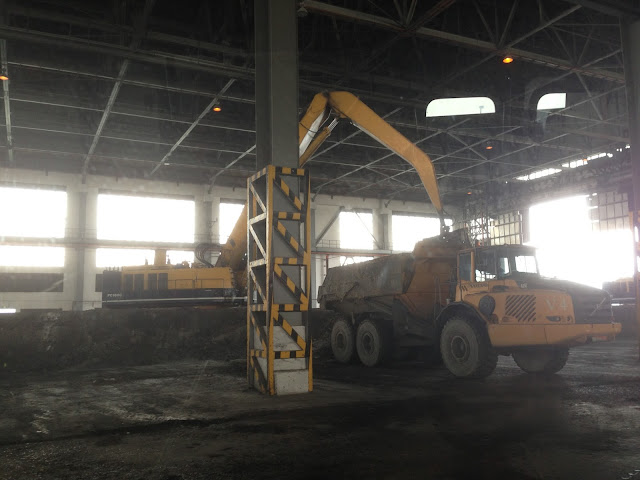 Posted by REDLeader at 8:59 PM No comments:


In Singapore, there are running events literally every month of the year. The recently-completed Osim Sundown Marathon 2015 saw the participation of about 26,000 runners who hailed from land both near and far.

With government's two prong approach - a push towards healthy living and revenue from sports tourism - much effort has been put into putting these races together. From running through the breath-taking Marina Barrage, to long stretches of the East Coast Parkway, most parts of the run were pretty pleasant. Certain roads were also closed to accommodate these events.

The first Marathon ever held on Singapore's soil took place on December 5, 1982. (1)  It was a major undertaking as many roads were required to be closed. Starting from Connaught Drive, the race then meandered around Singapore. Passing through the various suburbs of Geylang Road, Paya Lebar, Ang Mo Kio, Thomson Road, Orchard Road and finally to the National Stadium. (2)

This arrangement would have caused a lot of disruption to the lives of Singapore and thus, would be the catalyst for the government to come up with a better way of doing marathons as the years go by. Now, all running events are held in and around the Central Business District area, Marina Bay and East Coast Park to minimise the level of disruption caused be road closures.

Also, the event was pretty much exclusive to those who have a higher level of fitness as there was only one race - the Full Marathon - 42.195km.

Races nowadays are more inclusive as instead of a single Full Marathon event, there are also shorter races such as the Half Marathon, 10km, 5KM fun run, and even children's event. (3) These running events can draw in more than 20,000 runners. (4)