Sound of Silence. If anywhere in Singapore comes close to a ghost town, it would be the seven blocks of Commonwealth Drive. These Housing Development Board (HDB) flats are slated to be torn down in October 2015. It was not like that.

Looking at Heritage Blogger James Seah's post about this place, this place was once full of life. It had life. There was a spritely dame of a coffeeshop, and a kindergarten with nice wall paintings. Sundry shops, hairdresser and hardware shop were all located under these blocks. Indeed it was convenient for the residents there.

With the booming population that we see locally, none of these 10-storey blocks will be able to meet the need. It's all about building it upwards. In a nutshell, we cannot stop progress, but we can immortalise some of these scenes through photographs. I'd taken more than 100 photos but I'd like to just share three photographs that I feel, are most meaningful to me.

I started my walk at Blk 74 and was immediately greeted by this beautifully-laid mosaic tiles. Such tiles are really a throwback into time as nowadays, no one will lay mosaic tiles in such a manner. Many will not even use these tiles unless home owners are planning to create a nostalgic feel within their homes.

In its earlier years, Commonwealth Drive had a growing number of young families. Back in those kampung days, it would have been quite an effort sending the child to school and back as educational institutions were located centrally so that everyone would have access to schools. Things started to change in the 70s. Kindergartens were now located under the HDB blocks.

I can just imagine the crackling of children's voices as they learn to read and also, play. Looking at the louvered metal-windows, I can also imagine myself as an excited parent just hoping to meet the eyes of my child. I would have mustered a peep through the windows just to see if my child is doing alright.

These were the HDB letter boxes that quite a number of us are accustomed to. This is how we open our letter-box. There's a circular hook that allows you to put in your own padlock if you so choose to do so. If not, you'd just need to flip the centre lock upwards. Then insert your key to open the letter box.

One other interesting thing to note about the mailbox. The centre flap bears the unit number of your house. If you're staying on the first level and your home address is 777, then it would just be listed as 777. But if you were staying the second level, then your unit number would be 777-A, and third level 777-B. In the late 1970s, the government must have felt that it was difficult for some people and thus implemented 01-777, 02-777. The new format for address can be seen riveted on the top right corner of each letter box.


In the midst of letter-box gawking, I chanced upon this letter dated 1980. That is a 35-year old letter. The envelope looked pristine in its condition, though the transparent plastic that one could then see our names, had totally disintegrated. The inside document was also tearing, but one could still make up the gist of the letter. How did this letter go missing for such a long time. Also,  how did it largely survive the test of time.

Posted by REDLeader at 1:02 AM No comments: 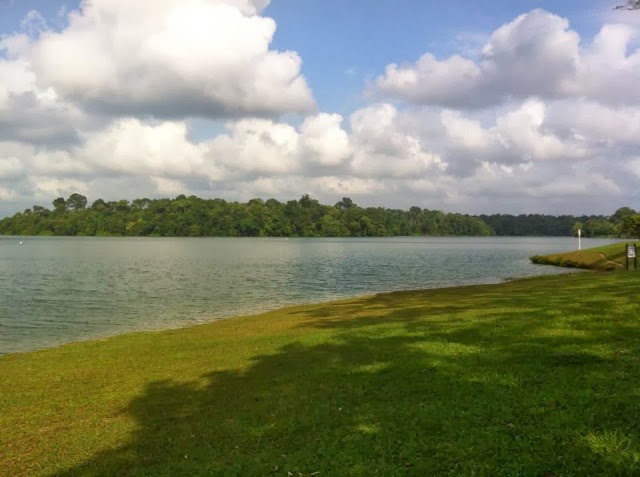 After finishing my night shift duties of my last reservist in 2013, I was driving home when I chanced upon this place called Upper Seletar Reservoir. Since time was on my side, I stopped my car and walked towards the reservoir. There was very little frontage for anyone to have a picnic or for cycling. But it was good for those who just need that quiet time.

The place was pretty much devoid of people.

A little history about this reservoir.

The construction of the Seletar Reservoir started in 1921 and was abandoned by the end of that year, as stated in The Straits Times article dated October 17, 1924.1.  The Seletar reservoir was deemed too expensive to be built  though there were still calls for works to proceed on August 6, 1921. 2 The rush was that there was not enough water for the growing population of Singapore as the supply of water slated to be available from Johore by 1925 was far from possible due to the many delays. 3.

Still as early as 1922, the beauty and serenity of the reservoir have started to see visitors coming to the place for excursions. 4.

In 1935, though Seletar Reservoir was still not a full-fledged reservoir, it still helped Singapore tide through a dry spell. 5 and in 1937, the government recognised that there was a need for more water and Seletar Reservoir would help to alleviate the issue. 6.

In 1939 that the government decided to make Seletar a permanent reservoir from one that was used a a temporary measure for water storage. The dam "would be raised by about five feet, increasing the capacity of the area four or five times". 7, 8. Completed in 1940, the reservoir could now hold 150 million gallons of water. 15.

Due to impending war and Japanese spies who might sabotage the water supply, Seletar Reservoir became a prohibited area in October 1941. 9.

In 1950, a writer wrote about the three reservoirs in Singapore. He mentioned that Seletar Reservoir was "hardly one of the beauty spots". 10  Interestingly though in 1951, another writer waxed lyrical about the reservoir. 11.

Near Seletar Reservoir, the Ministry of Culture screened free movies at the City Council Quarters to entertain workers who helped manage the reservoir from 1959 onwards. 12. 13. 14. 15.

There was a drought that in 1961 that saw many dead fishes that previously teemed in its pristine waters. 15.

With the need to more supply drinking water for the ever growing population, the government forked out $27 million in April 1967 to increase Seletar Reservoir's water storage capacity. 16.

By February 1969, the expansion of the reservoir was finally completed 17 and ready for its Opening Ceremony on 10 August 1969. Princess Alexandra officially opened the reservoir. 16. The Princess was invited here as part of Singapore's 150th anniversary and National Day celebrations. The official programme included a "72-member Methodist Girls School choir and the well-known girls' bag piper". There was also a rowing exhibition by the PUB team and "Koleh sailing by the residents of the Southern Islands". 18.

The reservoir could now hold 5,300 million gallons of water, making it the largest reservoir in Singapore. Part of the development included the valve tower which could be "approached by a six-span foot bridge and is 80 feet high" 16. Located at the reservoir was also a 60 feet viewing tower. 18.

Boat rowing competitions such as the Far East Rowing Regatta  was held at the reservoir in 1970. 19.

Posted by REDLeader at 12:00 AM No comments:

Singapore Election 2015 is a watershed one this year. Why?

1. More than 2 million Singaporeans have gone to the poll. This is the largest turnout that Singapore has seen in any election.

2. This is the first time that all constituencies are being contested.

3. Dr Chee Soon Juan, Singapore Democratic Party is participating in his first election since being banned from standing in 2006 and 2011 due to his indiscretions.

The People's Action Party (PAP) has garnered a resounding win against the opposition parties. The PAP has won all but one Group Representation Constituencies (GRCs) in Aljunied and one opposition stronghold in Hougang Single Member Constituency (SMC).

This election win allows the PAP to form the government for the next five years. PAP has ruled Singapore since 1959.

The internet screamed of unhappiness prior to the General Election. But once the polling booths were opened, the battles seemed to have ended before it had begun. All opposition parties lost by large margins. Is it the SG50 swell of feelings? Or the nationalistic emotions that the nation felt because of the death of our founding father, the late Mr Lee Kuan Yew? The analysis will come from both the incumbent and opposition, I'm sure.

What was suppose to Workers' Party push towards extending their grip turned pear-shaped losing Punggol East SMC that was wrestled over in the 2012 by-election.

The opposition may be down at this point, but I'm sure they will try again in the next election. So for now, congratulations to PAP for retaining power.
Posted by REDLeader at 3:11 AM No comments: