We have followed the entire 24-episode historical drama - Samsui women - when it was shown in 1986. We have seen for ourselves how the Samsui women trod on with their lives even when the going was hard. Still, I did not know much about their lives. 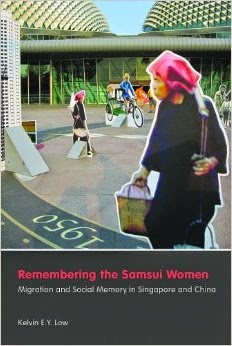 So when I saw this book - Remembering the Samsui women - on the bookshelf, I knew that I had to read it. I've also extracted nuggets of rich information from newspaper articles.


Called "the toughest women in Singapore", Samsui women or colloquially known as Samsui Por,  started flocking into Singapore near the turn of the century. This was followed by an influx of Samsui Por in the 1930s. Sau Eng was one of the Samsui Por (Women), shared about her reason for coming to Singapore from China in 1938. She was 26 years old then. (1)

"Day and night for 3 years, no rain...dry weather for 3 years, even if it rains, it's just such a drizzle that it can't even make the soil wet. Isn't that very difficult? So those grains will dry up." (2)

Another Samsui Por that the author had interviewed was Choi Yuk. She travelled with her mother-in-law to Singapore when she was 18 years old.

"Very terrible conditions...4 persons had only 1 meal a day...no money until paddy field had to be sold off, then came to Singapore." (3)

There were others who left their homeland due to the mistreatment dished out by their husbands or mother-in-laws. (3)

It was also a time where the world was just recovering from the Great Depression. The colonial rulers had limited the number of men coming into Singapore to work. There was no such restriction for women and children. During 1934 and 1938, Chinese women - driven by economic pressures and hoping to find their life partners husband, embarked on an arduous trip to Singapore. (3)

It has never been easy leaving the familiarity of a place for an unknown destination and future. So for the Samsui women to make this five-day sea journey in search of work, life in China must have been pretty bad back then. Each of them similar in that they were looking for a better life, but different in the sense that each of them has a different story to tell.


It was not a breezy boat ride into Nanyang (Singapore as it was known by the the Chinese). They would have to take a boat ride from their hometown to Guangzhou. Then to Hong Kong before moving again to Macau and finally to Singapore. The entire journey took them through seven days of choppy seas. A number of them, who were taking a boat for the first time, had to manage motion sickness, beyond other things such as cramped spaces within the boat, and unsanitary conditions.

When they arrive in Singapore, they were either picked up by their relatives. If not, these Samsui Pors settled themselves down in and around Upper Chin Chew Street or locally called Toufu Kai (Toufu Street). Even in the 1970s, Samsui women were still turning up at Cross Street "to sit at the five-foot way". (4)

The Samsui women interviewed said that houses along Toufu Street were decrepit; even worse than Hong Kong and Guangzhou.  (7)


In 1978, there were some 60,000 Samsui Pors left in Singapore as they continued to age, while other younger samsui women chose "alternative employment in factories or even civil service. (3) The Samsui Pors were also listed as a "must see" in some travel brochures. (1)

The hard work of these samsui women did not come to a nought. The hardy women played a part in the construction of "Capitol Building, Changi Airport, and the Development Bank of Singapore building." (8)

I was having a regular chat with my mother about the topic of the Samsui women and was surprised to hear from her that she had interacted with two Samsui women. This work-related converstion happened in the late 1960s when when my parents had just purchased their new flat. They paid for the Samsui women to work on tiling both the wall and floor.

My mom shared that Samsui women were renowned for quality and efficient work. They commanded more pay than other construction workers. Though my parents have long sold that flat, my mother still proudly states how neighbours would stop by our flat to gawk at the tile finishing.

Trustworthy; Hardworking; Resilient in the face of hardship. The Samsui women truly embodied that and more!

Words that played a part in the lives of the Samsui Pors :