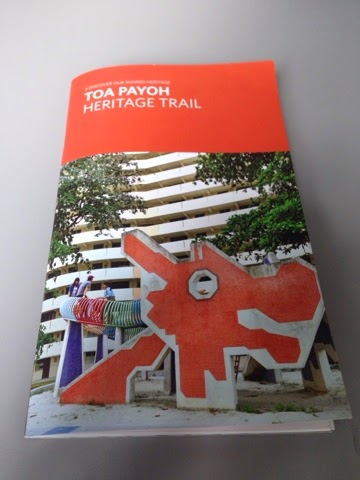 It was great to see that the National Heritage Board has put together a Toa Payoh Heritage trail booklet. I had the privilege of receiving a copy from a long-time Toa Payoh resident Nora. The booklet provides readers with a good history of Toa Payoh. In the past, the entire area was but a swamp. A very big swamp.

"the words toa (big in the Hokkien and Teochew dialects) and payoh (a loanword from the Malay word for swamp, paya)" - extracted from the booklet, p2. 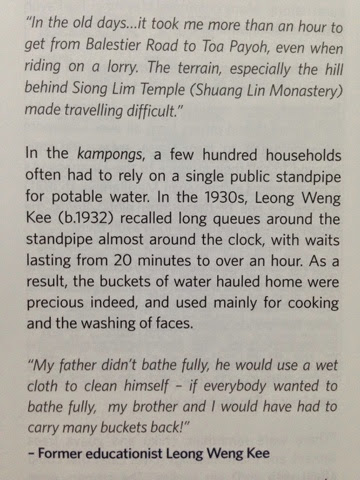 From the booklet, I'd also learnt about the importance of a standpipe in the community. It was really a life source where some in the community would gather to trade stories, and sometimes, trade punches. Water was indeed precious. It seemed so much more precious then. The words of Mr Leong Weng Kee also resonated with what I had experienced in the past.

When I was younger, my mother would sometimes say in her very colloquial way, "It's late. Don't have to bathe, just mat leong can already". "Mat Leong" in Cantonese means to "wipe your body". The origin of not having a full bath seems to point towards the difficulty in getting water for cleaning. It was a total luxury to see running taps in any household then. So using a wet cloth to wipe ones body was a good alternative. 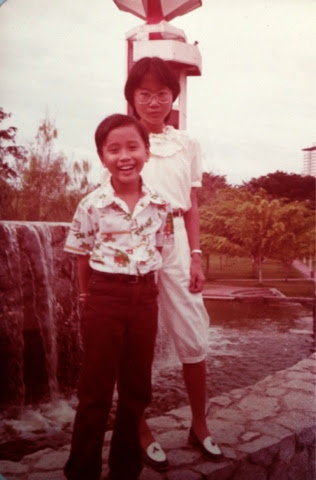 Back to the story of Toa Payoh. I neither grew up nor stayed in Toa Payoh in my younger days. My memories of the place is also not as vivid as those who have stayed there a large part of their lives. Still, if one's a true blue Singaporean, your life would have been inter-twined with this housing estate in more ways than one.

I dug up a photo of my family outing to Toa Payoh Town Park. The photo was taken in the early 80s. With me was my eldest sister. You can see part of the Observation Tower in the background. I remember that I was bowled over by the massive size of the park. I even took the opportunity to dip my arms into the cool pond water and did a little bit of water splashing.

My other tie-back with Toa Payoh was the visiting of my aunty and her family every Lunar New Year and I always marveled over how nice Toa Payoh as an estate was. 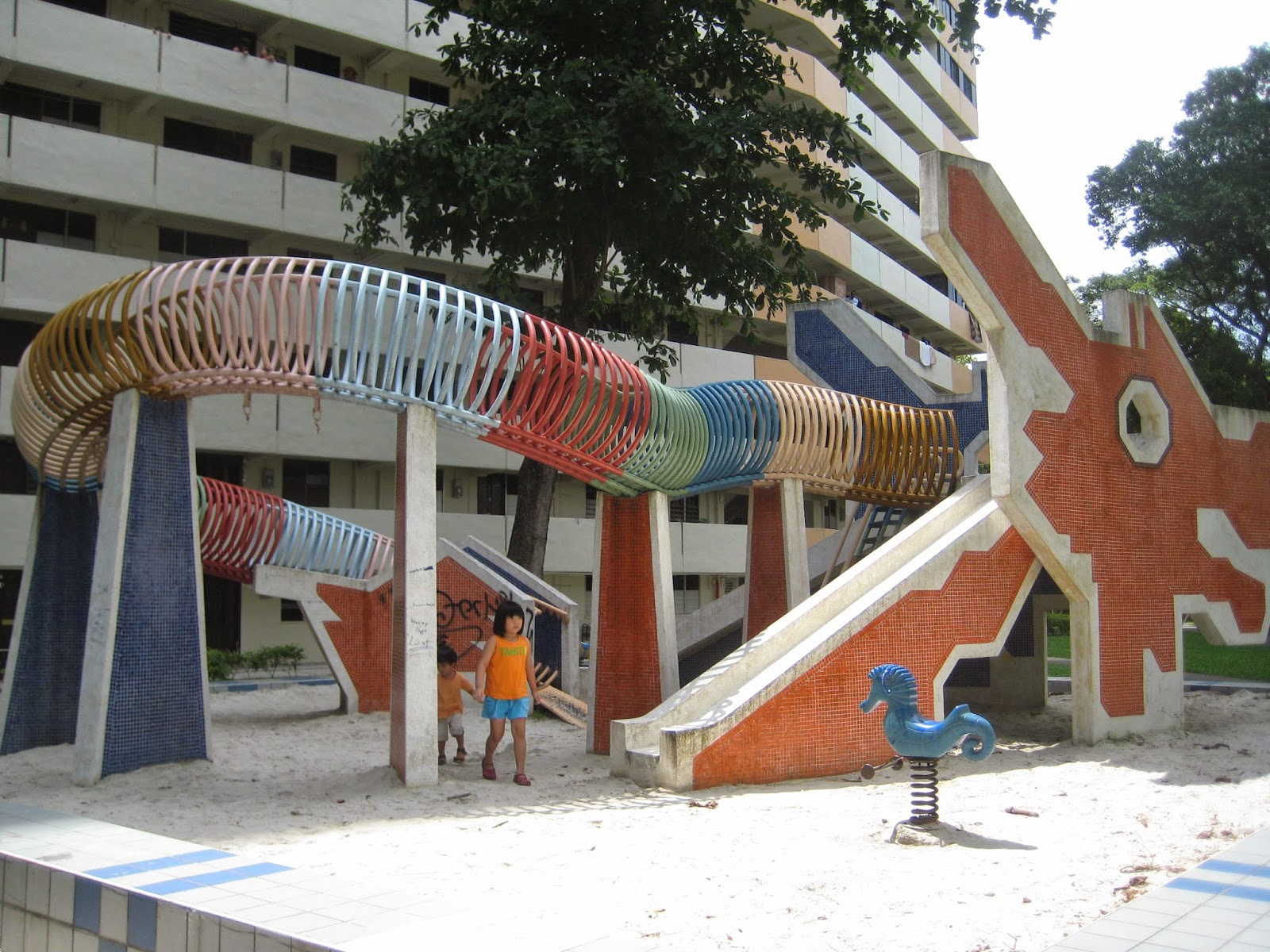 Over the years, I'd used the bus interchange, played basketball at the community centre, visited a friend who stayed at Blk 179 and attended weddings at Toa Payoh Methodist Church. I grew up as the housing estate grew mature.

Three years back, with me married with two kids, I read from the newspapers that the government would be demolishing both Blk 28 and the Dragon Playground. What travesty, I felt. The next generation of children will never know the type of playgrounds that their parents had spent much time at - playing and interacting with other kids. 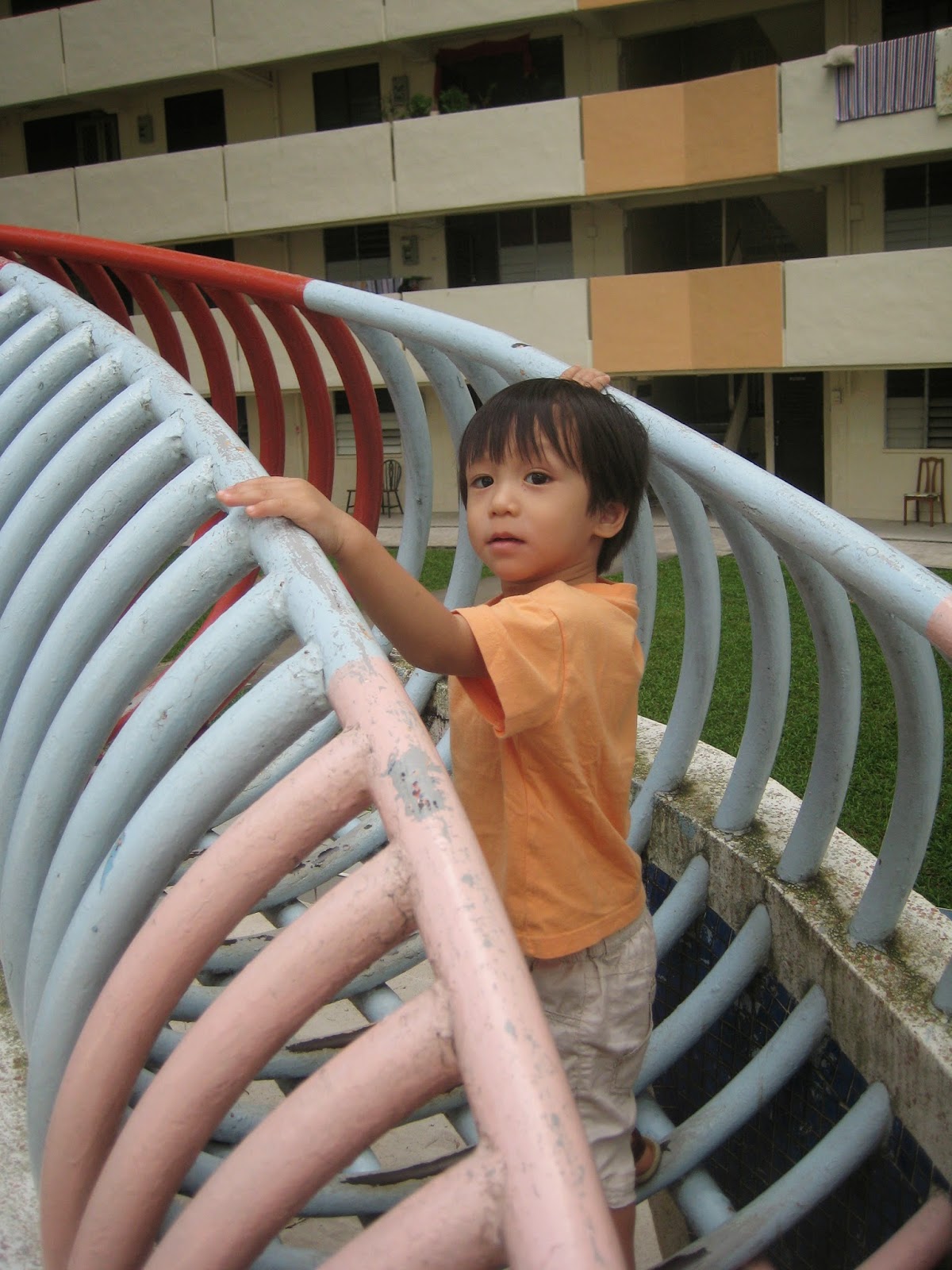 So I had to bring my children to this dragon playground. When we arrived at the playground, both my kids took to it like any kids to any playground. But in an instance, my son froze just before he reached the sand-filled playground. This was when I had realised that my son had never played at sand-fill playgrounds. All the latest playgrounds are covered with those spongy flooring. But after a little introduction to the ground, they were off. Climbing, jumping, running. Just as kids of my generation would have done. No cares in the world.

In the past, we played, we fell, we grazed our knees. We dusted off the sand and wiped away the trickles of blood, and carried on with our game of catching. 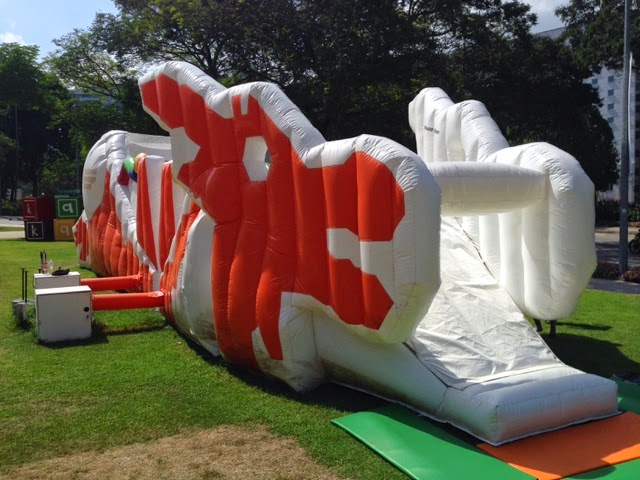 So circa 2014, I'm just glad that the government has decided to keep the dragon playground. With this Toa Payoh Heritage trail, historical buildings and the way of life are now being preserved for future generations. So it was nice of NHB to have a bouncy version of the dragon playground. But for this and other rich historical sites such as Queenstown and Dakota Crescent, nothing can ever replace the real thing. Let's leave something for the kids to remember.

Posted by REDLeader at 1:24 PM