Sir Francis Light wrestled over the rights of Penang in 1786 and soon after, started on building a fort to fight against the pirates. The largest standing fort in Malaysia is named after the Governor General of Bengal, Charles Cornwallis. The fort was listed as a national monument in 1976 and is now a privately managed heritage site. (1) (2)


Moat acted as a buffer against the invaders

To protect the fort against invaders, the British built a moat  9 metres wide and 2 metres deep moat around it. It would hae been a marvellous swimming pool if not for its original use and intent.  The moat was eventually filled in around the 1920s as people in the area was struck down by malaria and the stagnant water was surely a breeding ground of mosquitoes . (3) (4)

Highlights of the Fort

There was a signboard to say that some areas of the fort were under maintenance. That was well and good as some of the information boards were crumbling and the words on them could hardly be seen. Located in the fort are a chapel, a prison cell and an ammunition storage area. 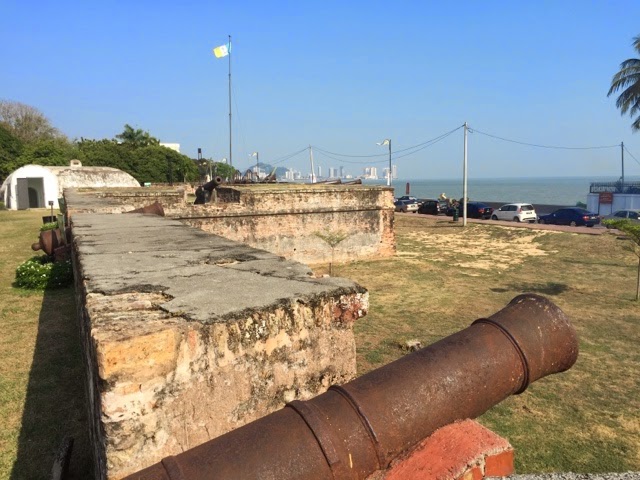 Actually, what caught my full attention were the old rusting cannons on display. The fort and its cannons must have been quite a sight both for friendly forces and would-be invaders. From further research, I found out that the cannons were not originally from the fort itself, but the British Straits Settlement was scouring around Singapore and Malaya to find these ancient cannons. (5)

These were the words seen on the board next to the Sri Rambai Cannon.

"Sri Rambai Cannon was one of the most famous cannons and was put on board a long wooden boat facing the North Channel by the Japanese in 1941. It had the Dutch East India Company symbol and dated 1613... In 1871, a British boat sailed in(to) Kuala Selangor and was attacked by pirates. The boat was sunken (sunk) and after that two boats were sent to destroy the city in Kuala Selangor."

Some critical information were missing. i.e. How did the cannon end up in Kuala Selangor?


The Sri Rambai Cannon was placed in the hands of many ancient rulers. A prized possession for any military that owned it, the cannon was casted in 1603 by the Dutch. The well crafted cannon was then presented as a gift to the Sultan of Johore in 1606. In 1613, the Portuguese grasp hold of it and was brought to Java. In 1795, it was then presented to Acheh, Indonesia and then brought to Kuala Selangor. The British finally seized the cannon and placed it in the fort in 1871. (6)

Forts in Singapore
Malacca, Penang and Singapore were all under the British Straits Settlement and thus share many similarities. One of which are forts that the British has established to protect their foreign soil. In Singapore, there were Fort Siloso, Fort Canning, Fort Pasir Panjang and Fort Tanjong Katong. But in comparison, none are as complete as Fort Cornwallis.