Three days in Penang, three tries of wonton noodles. It was paradise. The dish or at least the wonton originated from Canton, China and how it's cooked and the ingredients differ from country to country. (1)

One thing for sure is that wonton noodle can be found in countries where there is a Chinese diaspora, such as Singapore, Malaysia, Hong Kong and China.

In Penang, we tried out the wonton noodles from three different places. There is a similarity amongst all three noodles from Penang as all stallholders used dark sauce for seasoning.

I have to say that I'm no food connoisseur but I still have my preference. So here're the three wonton noodles stalls that we had sunk our teeth in. 1. From Gurney Drive Food Centre (Top); 2. CF Hawker Centre along Armenian Street (Left), and 3. the nondescript wonton noodles stall along King Street(Right).

Well, Surprise Surprise, the winner is the one from the nondescript stall! So here's what I think of each of the stall. 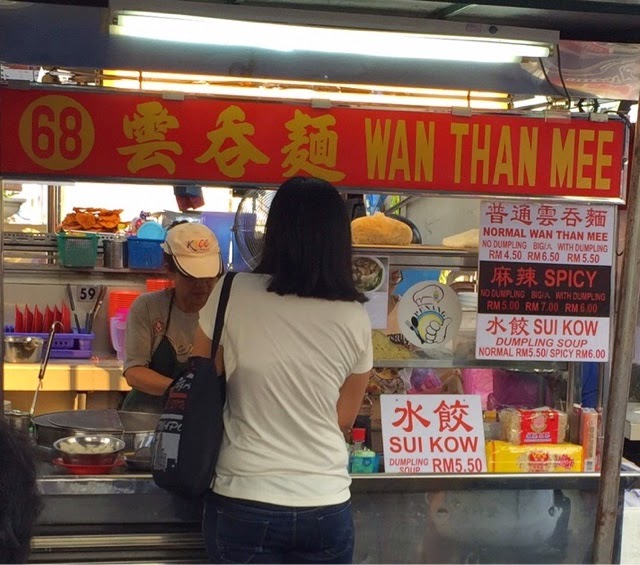 Business at Gurney Drive was brisk though the queue to order a bowl of wonton noodle was negligible. The lady owner asked me what I had wanted in pretty fluent English. Actually, all the hawkers that I ordered my food from could speak pretty decent English as Gurney Drive Food Centre caters to both the locals and to no small extent, the foreigners.

I can say that this stall puts together a well decorated bowl of wonton noodles. There even threw in a fried wonton, not for free of course but with an additional charge of RM1. I did not like it as I was not asked if I'd wanted the fried wonton. But small matter. Though the noodles here are the most expensive amongst the three stalls. CF Food Court sits at the junction of Armenian and Victoria Streets. There are numerous stalls selling everything from seafood to fried noodles. We chose a table that was closest to the wonton noodle stall. Other than the char siew and vegetables that comes with wonton noodles, the stall had also added chicken strips.

I'd just finished my walk around Fort Cornwallis and had asked the counter staff where I could get food. He pointed me towards Wisma Great Eastern building which I could see from the fort. The staff mentioned that I could either choose to eat at the mamak stalls or the various coffee shops around that vicinity.
I tentatively made my way towards the junction of King Street and Bishop Street, not sure of what I'd come across. 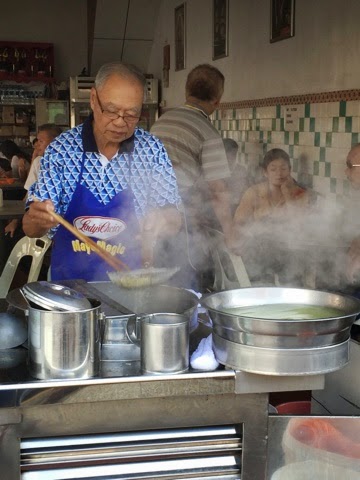 The wonton noodles stall was located at the entrance way of the coffeeshop and was run by a family - a husband and wife team, plus their daughter. The man who was preparing the noodles had that peaceful smile on his face. I could see that he is putting in his full love and care for each bowl of noodles that he prepared. Un-rushed by the hustle and bustle of the happenings around him.


Even though his was considered somewhat of a roadside stall, I was comforted by the fact that everything at his stall was pretty clean and well maintained. His zen-ish way took over me and when I was told by his daughter that I would need to wait for 15 minutes to get my noodles, I obliged.

The dipping of noodles into hot, cold then hot water helped to lock in the taste of the springy noodles. When I received my noodles, it was nicely tied up using a thin raffia string. It took me another 15 minutes to get back to the hotel room and even then, the noodles were still springy and nice.

No doubt the loving touch of this uncle made the taste of wonton noodles all so different.